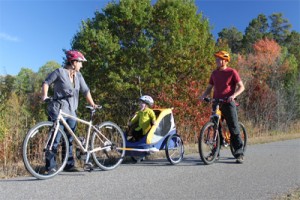 As the summer cools down, the biking season stays hot in Minnesota! September, with its mild weather and mostly clear skies, is a great time to hit the Brainerd bike trails.

Beautiful fall colors make Brainerd a popular tourist destination in the fall. Although many people choose to hop in their cars to take a Minnesota fall colors tour, cool, comfortable temperatures make September a great time to see the fall colors on foot or by bike.

Whether its spring, summer or fall, taking a spin on the Paul Bunyan bike trail will expose you to the natural beauty of Brainerd, Minnesota.

The Paul Bunyan State Trail, stretching 121 miles from Baxter to Bemidji, is one of the longest rail-trails in the country. The multi-use, fully paved trail is mainly for non-motorized use. However, snowmobiles are permitted during winter. The Paul Bunyan State Trail follows an abandoned railroad corridor that was built in 1893 and last owned by Burlington Northern. The corridor passes through boreal forests, along more than 20 lakes and 10 rivers/streams. You may also encounter wildlife along the way including white tail deer, beaver, eagles, osprey, fox, ruff grouse and even an occasional black bear.

The terrain of the Paul Bunyan trail ranges from flat and open to hilly and scenic. Along the 121 miles, there are many areas to stop and rest and enjoy the beauty of nature in Northern Minnesota. You might even consider bringing along your swimming suit and taking a dip in any of the numerous lakes the trail parallels. During the summer months, the trail can be used for hiking, biking and roller blading. Rental bicycles are available at many of the 15 connecting towns.

For those taking longer trip, you’ll find towns situated every 8 to 10 miles along the bicycle trail. Many of the towns have a history in the railroad and timber industries, and before that, Native Americans of the Ojibwa and Dakota nations lived in the region. Camping is available at either end of the trail at Crow Wing State Park in Brainerd or Lake Bemidji State Park in Bemidji.

Parking and access for the Paul Bunyan State Trail is available in every town along the way. The southern trailhead is located on Excelsior Road in Baxter. From the intersection of State Highway 210 and the State Highway 371 bypass in Baxter, go north 1 block to Excelsior Road then east ¾ mile to Conservation Drive; the parking lot is on the left.

On the southern end of the trail, you can also park in Crow Wing State Park.

The northern trailhead is located in Lake Bemidji State Park. From Bemidji, head north on County Road 21 for about 4 miles, then east on the same road for 2 miles to the park’s entrance.

There is also parking in the towns along the trail including Merrifield, Nisswa, Pequot Lakes, Jenkins, Pine River, Backus, Hackensack and Walker.

The Paul Bunyan Bike Trail is one of the most popular Brainerd bike trails. With it’s even terrain and beautiful location, it’s a must-see on your next vacation to Brainerd, Minnesota!