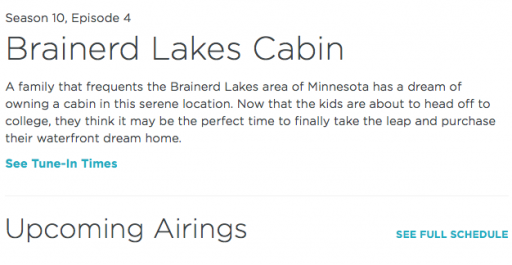 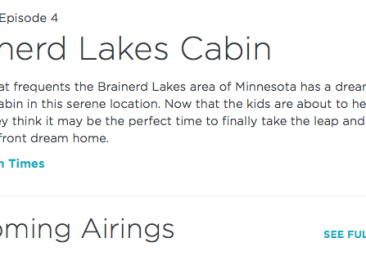 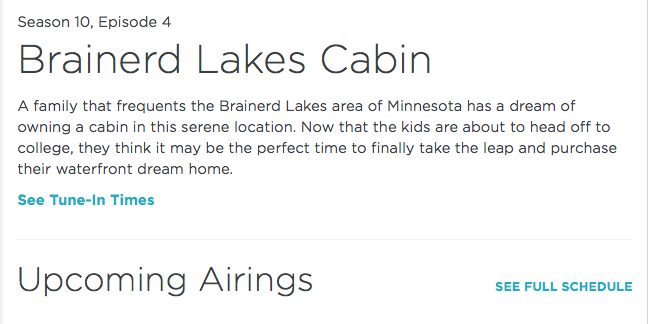 Almost a year ago, I received a phone call from a producer at HGTV’s Lakefront Bargain Hunt. They were looking for a location to film a portion of a Lakefront Bargain episode. If you have ever seen the show, a couple sits down with a Realtor in a public location, usually a restaurant or bar and discusses what they are looking for in a lake home. They also sit down at the end of the show and talk through the houses they’ve seen and which house they are going to buy. They wanted to use Cragun’s Resort for this part of the show.

I was surprised at the number of people required to film these episodes. They flew 6-8 people in from New York and they stayed in the Brainerd Lakes Area for 5 days. They arrived in two vans with LOTS of equipment and spent 3-4 hours at our lake resort in MN to film these 5-minute segments of the show. We set them up on the sundeck outside our pool area, so they had the gorgeous views of Gull Lake in the background. We had a full-house of guests both times they were here so there were a lot of stops and starts during the filming with curious guests wandering into the shot or a noisy boat going by on the lake. The crew that came from HGTV were all very friendly and great people to work with.

For the first episode, they worked with local realtor Brent Anderson. He had been contacted by them a year earlier (someone had referred him) but he was not interested at the time. They called him again because they really wanted to do some episodes in the Brainerd area. He was asked to refer 3 or 4 of his clients that HGTV could interview as possible guests for the show.

The second episode the couple came back to the resort the next morning with their two kids and two jet skis. It was a very cool morning, but the two kids got on the jet skis and they were filmed taking off and riding around Steamboat Bay. I wasn’t sure how that was going to be used unless they were “pretending” they were using their jet skis at their new lake home.

I asked the HGTV people and Brent what motivated people to want to be on the show. Realtors who choose to participate can get some great awareness. As for the house hunters, most of them just like the idea of being on TV. A few of them have plans on making their new lake home available for rental. This would allow them to make the claim “As Seen on HGTV” on their rental listing.

While working with HGTV to set up dates and times for them to come to Cragun’s lake resort in MN some good friends of mine who had their lake home for sale in my neighborhood were also contacted by HGTV to participate in a show. HGTV wanted their home to be one of the homes someone toured while searching for a new lake home. They agreed to include their home in a Lake Front Bargain Hunt show They were asked not to be home while the filming was taking place and that it would take 6-8 hours to do the filming. The neighbors reported that they were indeed there for almost the entire day and that they brought in a lot of different props (pillows, blankets, dishes, etc.).