Think you know your Minnesota fish? Take this quiz. 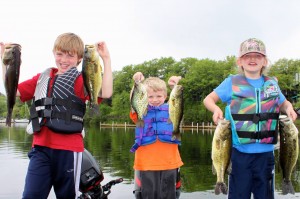 Minnesota fishing is the best there is. The fish are varied and challenging enough for any angler. Take this quiz and find out how much you know about Minnesota fish.

1. This is the most sought after Minnesota fish. The state record for this fish is 17 pounds, 8 ounces.
a. Perch
b. Northern Pike
c. Walleye

2. There are two types of this Minnesota fish – black and white. These fish tend to travel in schools and feed on small fish and aquatic insects.
a. Catfish
b. Crappie
c. Sunfish

3. Sometimes called a “bronzeback”, this Minnesota fish is one of the strongest fish there is for its weight. These fish are abundant in warm southeast Minnesota rivers and central Minnesota lakes.
a. Small-Mouth Bass
b. Northern Pike
c. Bullhead

4. This fish is one of the most commonly caught fish in Minnesota and is the smaller cousin of the walleye. Average length is about six inches but some reach a foot or more.
a. Bullhead
b. Brown trout
c. Perch

5. There are several species of this fish in Minnesota but the most popular with anglers are the Bluegill and Pumpkinseed.
a. Crappie
b. Sunfish
c. Carp

6. This fish is a daytime feeder eating mostly fish, especially perch and suckers. This fish is an aggressive predator found throughout Minnesota in lakes, ponds and rivers.
a. Carp
b. Perch
c. Northern Pike

7. This is an exciting fish to catch with wild airborne leaps. This fish eats underwater insects, other fish, frogs, snakes and sometimes even ducklings.
a. Large-Mouth Bass
b. Northern Pike
c. Catfish

9. This fish is a member of the pike family, is a large solitary fish, and is light colored and has spots on its side.
a. Sheephead
b. Muskellunge
c. Rainbow trout

10. This fish is named for its pearlescent eye, which is caused by a reflective layer of pigment that helps it see and feed at night or in murky water.
a. Walleye
b. Perch
c. Sauger

Cragun’s Resort is a great home base for Minnesota fishing trips. Our location in the Brainerd chain of lakes makes it easy for you to explore the best lakes for fishing in the state. Plan your next Gull Lake fishing trip with Cragun’s Resort!