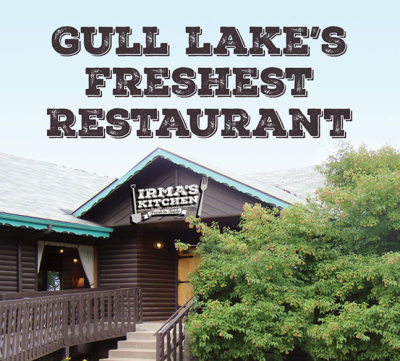 IRMA’S KITCHEN IS CLOSED FOR THE SEASON.

Thank you to everyone who came out this summer!

Irma’s Kitchen is located at the south end of Cragun’s Resort in the former home of the Hungry Gull Restaurant. The restaurant was originally developed by Walter and Lena Frampton back in 1926. Lena cooked and served three hearty meals a day, lumberjack style. In 1946, Ben and Eleanor Curry became the new owners of this Brainerd restaurant. They added the dining room’s north wing with timbers coming from the Pine Beach Peninsula. They expanded the resort and operated it until the early 1960’s. Thereafter, the Thiel, Yoho and Bearson families owned and operated the resort known as Island View Lodge until the late 80’s.

In 1988, Dutch and Irma Cragun purchased Island View and connected it to the Cragun Complex. The Lodge was opened a year later after kitchen enlargement and redecorating as the Hungry Gull Restaurant & Bar. When you come to dine, take notice of the Pastry Cooks cupboard which was salvaged from the kitchen by Irma and refinished to retain part of the buildings tradition of good cooking. The name for Gull Lake’s freshest new restaurant, “Irma’s Kitchen”, was chosen to acknowledge the important role that Irma Cragun played in the food service at Cragun’s Resort over the years. 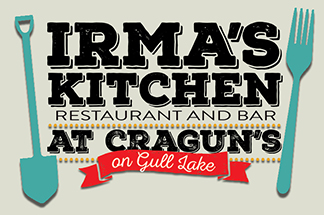 As for the food, all items are made in-house using many of Irma’s recipes and the freshest local ingredients. The menu is divided into sections titled Appetizers, Soup & Salads, Kids Menu, From the Grill, and Entrees